Finally, they have reopened the Tonto National Forest here in Arizona. Closed for about six weeks due to fire concerns, they have now allowed us back in, but of course, absolutely no fires of any description allowed while you camp or RV!

That is excellent news for all Fly fishermen/women who have been deprived of some great higher elevation fishing. I was lucky to be out of town for awhile Fly fishing in Eastern Washington and Northern Idaho, I will write at length about that in another blog.

Yesterday, Marc and I headed to one of the local streams that we hoped would have some water moving through it. The monsoons have been slow to arrive, so we are desperate for water, not only to dampen down the forests but to breathe new life into our streams. Typical for this time of year here in Arizona.

Phoenix’s weather for the day was predicted to be one hundred and eleven degrees Fahrenheit, but up where we were, it was a mild eighty-eight degree and in the shade of the trees in the water cooler, which was a pleasant break from the dry heat of the valley! 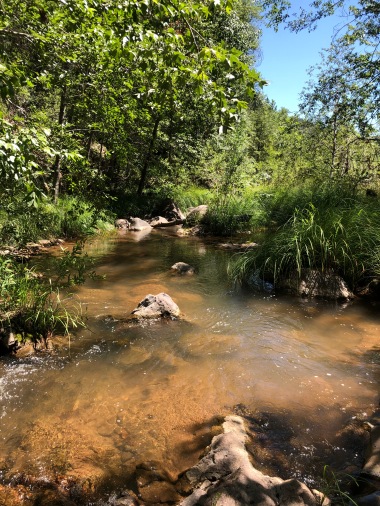 I was hoping for some hopper dropper action and set up a small grasshopper with a trailing size eighteen nymph with a little chartreuse shackle on its brown body. It was very apparent right off the go that you needed to fish any shaded areas and forget about water that was in the direct sunlight. In this stream, that is tough fishing as you have to get in up close and personal to covered water. The first riffle that I approached I could not get a fly on the water from my side, so I crossed at the lower point of the water and approached hiding behind the brush and some boulders to dangle my fly at the headwaters and let it drift on down thru the faster deeper run. My third drift down produced one beautiful fighting rainbow that was very pissed off to have something sticking in his lip. In overhead cover and on a small 4# Fly rod, it was a great tussle!!

Marc was ahead of me fishing when I caught him up watching some fast-moving water. He told me that a grasshopper landed on his hat, and he caught it, putting it in at the top of this run. About halfway down in a very tight hole under a bush with brambles hanging over, the grasshopper drifted down fluttering away when a nice trout just came out and gobbled it down. We could see where he was lying, so Marc told me to put my grasshopper over him. That was easier said than done!!

I could not cast too much cover to him, so I put the grasshopper in at the top of the run, but I had to get in on the current that would take to his side. After several futile attempts, I did manage to get my fly to go right where he was. We watched him come up, take a look and swirl away. This was one educated Trout!! Several attempts and another swirl this time on the nymph, but no takes time to move on!

The rest of the day, we fished on up through some great water producing for me about seven rainbows and Marc about ten or so, so not bad considering the day. Fishing up over boulders, under trees, bushes, brambles you name it is not easy work, so around four, we decided to head back to the truck.

When we reached the truck, there was one nice long piece of slow deeper moving water that earlier on had produced only one Trout. It was now in the shade from the canyon walls I just could not pass it by, had to have a few casts. I had changed my rig up earlier that day to two nymphs under an indicator. Marc had fished most of the day with small flies, one being a black pheasant tail-sized sixteen that he stripped through the water with great results! I should have done the same but was too lazy to change rigs again!!

Regardless this time, I had on the same nymph brown body with a tuft of chartreuse shackles, but underneath I had changed to a size twenty black with silver midge; I have always down well with that nymph in the past. 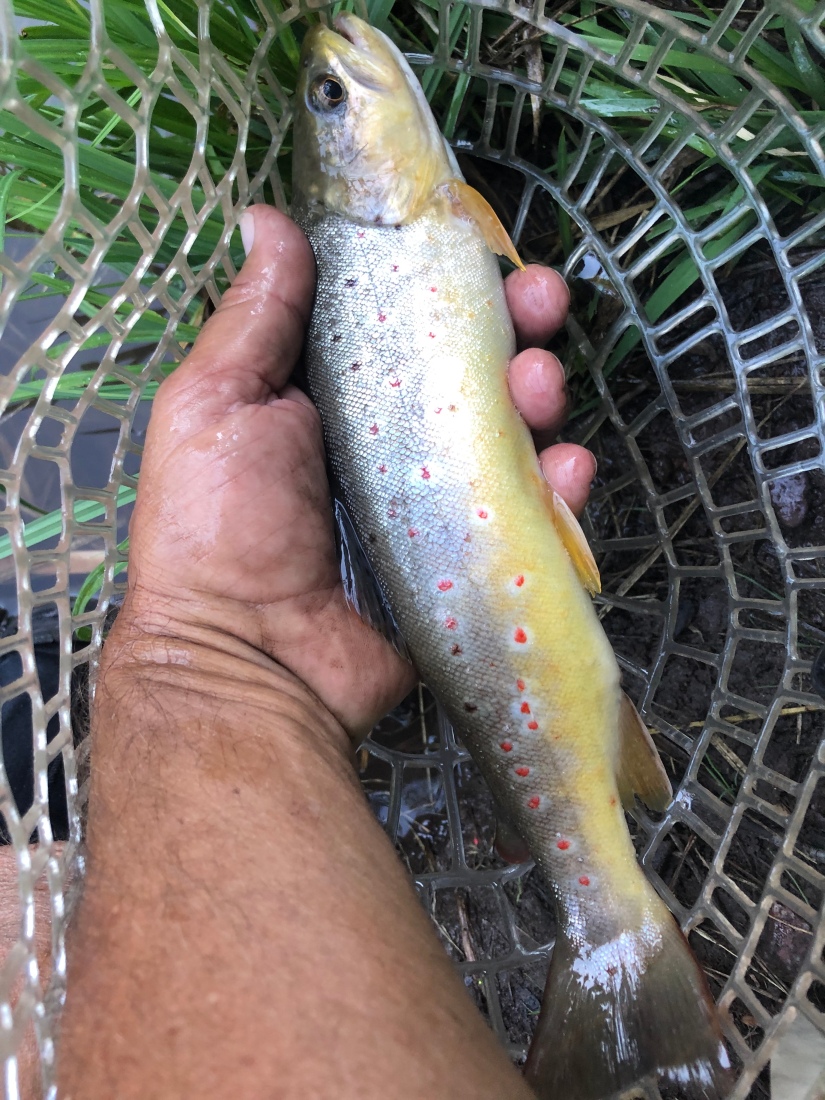 I found a spot with an overhanging tree close to the water, but more importantly, I could see that the water was moving slightly faster in a section across from me with foam and bits and pieces moving down. I was roll casting under the tree and up, letting my flies dead drift slowly down in this current. Almost immediately I had a beautiful rainbow on, for the next twenty minutes or so I landed a bunch of nice Trout, hoping that Marc would reappear. At about this time, I had a nice hit that produced a beautiful fighting wild brown that took my top chartreuse tufted nymph. I love these fish; they are hard to find and do not give up the fight.

After landing this, I left my rod on the bank and went after Marc to come over and re-rig!!! He did, and of course, it is now sod’s law as the fishing slowed down. We did catch a few more, but it was not fast and furious as it had been, All, my Trout that evening took the black and silver midge. In this piece of water, I had the nymphs down about eighteen inches off my small indicator with the bottom midge probably about three to four feet down just off the bottom as best as I could judge. The water that day had some color to it, so that helped hide us as we were often time very close to where we had to cast. Stealth and at peace with nature almost a Zen feeling of being one with nature, it does not get any better than that.

As I get older, I find myself getting a little contemplative about the years past and I kick myself for not getting back into Fly Fishing sooner. Don’t get me wrong I am living a wild and wonderful life, but I missed many good years to be on the water. I guess life is a trade-off as I have been busy running a business all my life, and that takes its toll!!! I have always been limber and sure-footed, but now I find myself being extra careful as I am not quite as nimble as I was, Father Time has a way of catching up to us. To all younger people, treasure your youth and don’t squander your time, get out there and see some of the most beautiful lands that Fly Fishing will take you to, no matter where you live. Tight lines all!!!