Now for some perspective from a Fly Fisherman’s point of view, as to a hiker, hiking the well-defined trail.

Well, that sounds great! If you are a hiker, with proper hiking boots and all the correct gear.

The stream starts out underground for the first half mile or so, going underground in the limestone tunnels. Passing thru a gate you notice a few signs telling you it is catch and release, beautiful picture of a wild brown trout. The juices are starting to flow!! The path moves away to the left, you have to head into the tall grass, and there is the start of a small trickle.

I will put my point of view into perspective, as I am sure younger fishermen will find this easier than I did. I am sixty-four years old in reasonable shape but could use to lose Thirty pounds, so take reasonable with a pinch of salt! However the mind is a beautiful thing, and as we get older, age is just a number!!!

The stream to start off with is small with a lot of trees and bushes in the water, there are some small shallow pools, to begin with holding small trout. As you move further up, about a mile and a half you come across some beautiful waterfalls in a series one after the other with some nice holding water just below each one. I am sure they hold some nice size browns. 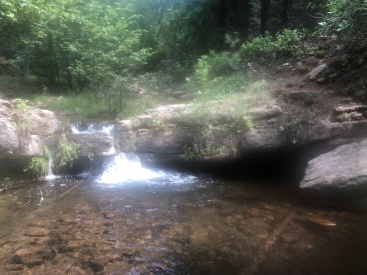 My problem was lady luck was not with me that day, as I turned around to find two gentlemen walking along the stream with their large dog who was having a great time in all the pools he came across. Splashing, running in and out, waiting on these two guys who stopped at each waterfall to take their pictures in each pool, regardless of this poor fool of a fisherman who obviously was fishing and trying to be quiet to catch these elusive browns.

I understand we share the planet, on the one hand, I wanted to say something to them but on the other, who really has the right of way! I figured I would wait back a bit and follow more slowly, but as it turned out the damage was done, and the fish had moved on. These guys stayed on the stream for a good couple of miles, so I am sure a lot of the fishing holes had been too disturbed for that day.

As I was on a fact-finding trip, having never fished here before I just studied the stream looking for potential spots for the future. As you move on up in the elevation, you will feel it, as the terrain along the river is very overgrown in places, and in others, you have to scramble up steep crumbling embankments. Then work your way thru bramble bushes, small pine trees and other fallen trees and logs.

After which, you have to work your way back to the stream to see what is in front of you and going upwards how you can get back on the stream. Often time you do this only to find the stream to be overgrown and no good fishable spots. At least from a fly fishing point of view. Of course, you can do the old bow and arrow cast, but you better be accurate, or you have just lost your flies.

I did find this one beautiful pool I came upon, crossing logs to see two big sixteen inch plus browns, just laying off the fast-moving water. No way to cast to them, so I tried a bow and arrow cast a couple of times, no interest! They just stayed there. I moved off the stream went much higher up, hid behind some bushes and then cast down on to them from way above, nothing, I then stripped past them turning one to look and off they went!!! Bummer!!!

At this point I was sweating like crazy and really feeling the elevation, if I was due to have a heart attack now was the time!!! On the other hand not having one I felt some hope for the future. The stream still holds a few good waterfalls and pools but they get increasingly harder to get too. About four and half hours into my slog along the stream, I came to a left-hand bend around a corner only to see the stream at least seventy yards higher up than I was standing!! Looking forward there was a serious of small falls one on top of the other. The stream at this point is probably only about five feet wide.

Time to find the trail. Moving up and off the stream, I came across the trail in a series of switchbacks going up the side of the hill. They say discretion is the better sign of valor and at this point, I was done. I passed this very fit young man, who was coming down, and asked him what happened at the top of the trail if it flattened out and how far was it?

He told me I had about five minutes left and I would come to the spring head in the side of a cliff. Well, Ok I guess since I am here I better take a look!!! Five minutes being the optimal words from a young fit guy, more like twenty minutes of a grueling climb!!!

The only thing left to do was hike to the spring head to see what had created this lovely little burbling brook. Eureka, there it was a hole in the wall with water gushing out who knew!!! I guess I better read up on these streams before I head out!

On reaching the end of the line, in this case, a hole in the rock face with this pure fresh spring water. I filled up my now empty water bottle, gulped down so much water, then refill for the hike back.

The journey up took me five hours of hard slogging thru the undergrowth, puffing and panting like a rabid dog!!! I did not know in the beginning how long the stream was or where it started. I had not thought about that. Now for the fun part, as I said the sign previously said four miles! O, Joy!!! 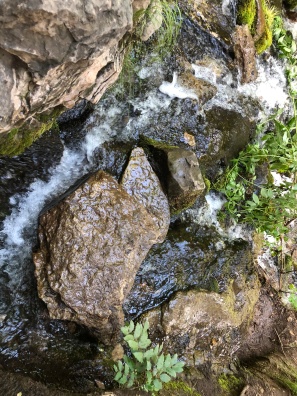 My wet wading boots are not that comfortable, to begin with, after five hours in and out of water, my feet were feeling it! Mind over matter! Trudge on, walking downhill after the slog up was even harder, talk about leg burn, reminded me of my old skiing days long gone!! The ends of my toes, killing me! You get the idea.

So to sum up my day, I did catch four very small brown trout and I mean small!

The walk up the stream was well worth the slog up and over all the fallen trees and logs. I have a good understanding now of where to fish. With my new knowledge, I will only probably fish the first three miles, but you never know as I always feel that monster is just up ahead of me!!! The other thing to be aware of is the hikers, better to go there on a week day, not the weekend. The car park at the bottom was full, so I should have been warned!!! Seven plus miles on the trail not sure how much extra distance added up going up and down, back and forth over all the logs, etc.; When  I got home I needed a hot shower to loosen up my back and legs. Better luck next time.