Over twenty-four Guides from Montana, Colorado, New Mexico, and Arizona get together for a fly-fishing bonanza once a year, for fun and to exchange stories and fly-fishing experiences.

I was lucky enough to be invited to this gathering. My friend Dave and I arrived at Twelve lunchtime after leaving Phoenix at Five am! The guys from Arizona all arrived at the same time we all launched our boats for a late float down the river. Many of the other guides had arrived earlier, some launching their boats and other wading the Braids and further up the river to the dam.

The weather was bright and warm, with water flow around three hundred and eighty cubic feet per second, water was clear to murky. As it turned out that day, the river did not want to give up its gold, with fishing for all concerned difficult. Some caught up to five fish others nothing, myself at the end of the day on a late run decided to put on a chartreuse-colored egg. I remembered from one of my previous trips on this particular stretch late in the day it had been effective! Bingo one nice small brown trout on one drift thru!!! At least I was not skunked!!!

That evening we all met up at the lodge for dinner and great conversation. Long day, I think everyone was tired, so we all left and hit the beds relatively early—the plan to be launching on Texas hole no later than eight am.

The next day we all split up again some in boats others wading. The weather was beautiful bright, and clear. Again, we all worked hard with much the same results, a very mixed bag. However, one bright spot for us on the top end of Texas hole was to watch a guy wading in very shallow water across from us land what was reported to be a Thirty-Seven-inch brown!!!! It took him a while to bring in. 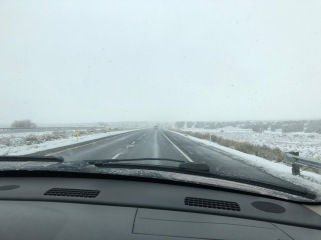 All I can say was that he had a big net, and this fish-filled it out; it was so thick it was a real pig. There were plenty of people around all taking photos, so it was well documented! The fish happily swam away from the madding crowd. Back to the boat, it was a difficult day with the same results as the day before. I landed four fish for over ten hours of fishing all rainbows. Back at dinner all the same results as the previous day, except for Brittany from Colorado. She killed it!!! Rumer was around thirty fish for the day.

So, you can imagine all these guys at the dinner table!!! Questions, question?? What fly worked for you??? It turns out Brittany had tied her particular fly. After much humor, she gave in and showed the fly to all. We all took photos!!! That night in my room, three guys were trying to create the new fly, they did not have the exact color materials, but they came close. I am sorry to say I am sworn to secrecy and will not divulge the fly pattern!!!

Now the next day, we were expecting a storm to come in late in the day, we awoke to some cloud cover forming and a drop in temperature. Dave and I were the first boat in Texas hole, so we rowed up to the left side dropped anchor just down from the strong flow running in from the braids. Great piece of water, very fishy!!! I left on my rig from the night before to see what would happen. I had on a size twenty-four chocolate emerger with my chartreuse egg below that. I rigged my flies with the weights below the bottom fly to get down deep in the flowing water. My leader was at least ten-foot-deep to the bottom fly, as where I was casting the water was deep.

A few drifts in my indicator disappeared, nice rainbow on!! A few fish more, and I said to Dave, who is just getting back into Fly tying, to give me one of the new creations that he was trying to make of the super-secret fly!! He will be the first to admit it was a bit motley to be kind, but to me, it looked fishy!!!!

A few drifts later, we were high fiving each other laughing that a new fly tier has been created, it worked, nice rainbow on!!!!! No stopping him now!!!

Karma is a strange bedfellow, for at that moment the hatch turned on there were trout rising all over the place. Dave took a seine net ran thru the water, we looked at the bug life, the net had tiny black larvae which were floating on the surface, Tiny!!!!

We decided to put on Big Hoppers, the bigger, the better to be able to see, as there was so much current turbulence and shadows flitting over the surface in the sun out of sun. Then rain and wind and more rain coming down it would be hard to see any fly. I put on a black bling midge size twenty-four, ten inches behind the hopper. Looked just like the larva we saw in the seine net! Dave put of a size twenty-four RS 2 emerger Black about eighteen inches behind his hopper.

The river gave back to us as we just hit gold. The strikes were swift, we both caught rainbows one after the other, but both missed a lot of strikes, they were very sneaky, all the trout we caught were just hooked in the upper lip. The hatch stayed all day, and we decided not to move as it was hitting on all cylinders. Your all going to think we were on good drugs as we stopped counting after thirty plus fish each!!! No kidding, it was wild. We fished there all day; towards the end, my arm was starting to ache I had thrown so many casts from eight in the morning to after five in the afternoon with no breaks to speak of.

The San Juan at its best Dry fly fishing that you dream about. A few bigger rainbows even inhaled the big Hoppers. They hit them hard, taking well into their mouth. We saw plenty of trout coming vertically out of the water into the air at least two feet before splashing back in.

On the odd occasion seeing a big old boat surface, you know when you see a big back and hump as the fish slurps the surface only to disappear into the depths again. There were some big boys prowling out there!!!!

What a day! Later on, we found that most everyone had a great day no matter where they were on the river. One of our friends landed a twenty-eight-inch brown after a long epic battle. After two days of throwing the book at them with little success, the fly gods felt for us, and we were rewarded with epic Dry fly fishing. The next day we were leaving; it was snowing and cold; a few of the guides stayed to fish on. Till the next trip we may be better equipped with new found knowledge, but I know the San Juan river will as usual, throw us a few curve balls going forward. That is the beauty of Fly Fishing the unknown and slowly gaining experience.