Getting up at three-thirty am to eventually arrive on the river at three pm New Mexico time. We had to meet up, load up the truck and drift boat, and off we all went. Matt and Steve, who are Arizona Fly Fishing guides and very accomplished fly fishers, If you want to be a better fly fisher, go with better guys, and you will improve vastly, just like in golf! Steve, an airline pilot who has the craziest Move recollection and Me just an old dude!

The afternoon was bright and calm, with no wind, hallelujah!!!! Four guys in a drift boat does not work, so we dumped Steve the guide off on the left bank of Texas hole. The three amigos just dropped anchor up from him. As usual, there were plenty of guys in the water at the head of the hole.

We became like choreographed casters, one on each end of the boat with Matt in the middle, casting into the faster-moving water. We worked well together with no tangled lines on the backcast!

We did not have a lot of time before dark, so we stayed where we were and fished away. Matt and Steve 2 have plenty of local knowledge, which became more and more important as the trip went along. Steve 2 was a catching machine off the bank landing about a dozen nice Rainbows, while Matt landed close to the same amount, with the odd brown thrown in. Steve 1 and I landed a few fish. Steve 2 was fishing a size 22 brown, and gray Beatus fly with great success, while Matt was using tiny size 22 red-colored annelid flies. Also of note is the fact that we changed from a size 20 to size 22 which made all the difference.The strikes at the Juan can be very subtle, and you have to be very aware of any slight movement, I lost at least six fish that afternoon due to late strikes or feeling the fish on for a second before they throw the fly. Using such small flies does not give you a lot of room for error. Certainly, a great learning experience for me! 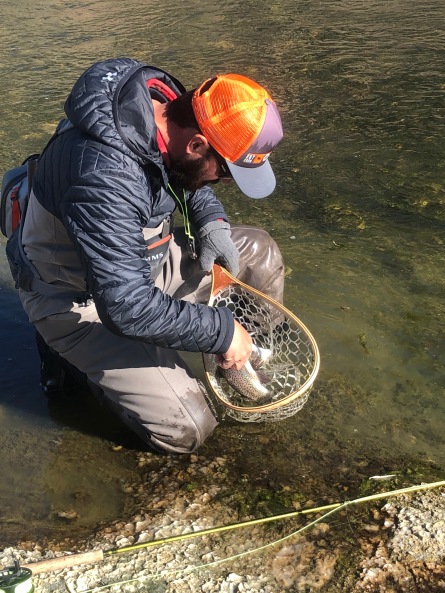 At dark off to a restaurant for steak and beers, then back to rooms where Matt and Steve 2 started tying new flies for the next day, based on what they thought would be current due to conditions. I went and had a shower dreaming of bigger fish!!

The next day up early and first boat on the Texas hole, of course again, guys were wading at the head of the hole covering one of the best spots. This time Steve 2 meet some old friends of his who had their own drift boat, so he saddled up with them for the day. We all fished the hole for about four hours roughly with some success. We all changed up flies trying all kinds of mixes. Matt and Steve 2 did very well with Steve 1 and I bringing up the rear again, due to less experience. On occasions like this, you have to watch and learn, the subtle mini mends in the line, the correct drift in the right seems all so very important. I have to say that Matt and Steve 2 were very generous with their time and knowledge on this trip, and we’re always looking to help you and point out things that maybe you were not thinking about. A huge thank you to those guys!!

Later in the day, we started the drift downriver, stopping along the way to get off the boats and wade different areas. On one stop, Matt, Steve 1, and I were on the left side of the river while Steve 2 and his friends were on the right side. On our side the trout were feeding on the surface as well as deeper down, we put on a variety of dry flies with no success and again with wet flies’ same result very frustrating!! On the other side, the guys were catching a lot of trout. Matt even used the same flies as Steve 2, who was killing it, the same flies on our side no go. Time to move on, we spend the rest of the day drifting down, catching the odd fish here and there very pleasant!

Of course, Steve 1 catches a very small last-minute trout at the landing area, only to get ribbed that he was holding us all up due to this huge fight he was having with this monster trout as we all wanted to get the boats out of the water. No mercy in this group!!!

Off to dinner and beers, tough life, but someone has to do it!!

The last day we were going to wade the braids, which is the area up above Texas hole that you cannot drift in a boat. It is all catch and releases up to the dam with great fishing to be had. The plan was to leave at the latest one pm as we had a long drive back.

We all fished various parts of the stream with Matt and Steve 2 doing well. Steve 1 caught fish but has this strange way of talking to fish in a strong Chinese accent when he is fighting the fish. I think his brain was addled from too much sun exposure. Steve 2 has the same habit, but at least he speaks in English to them!!! 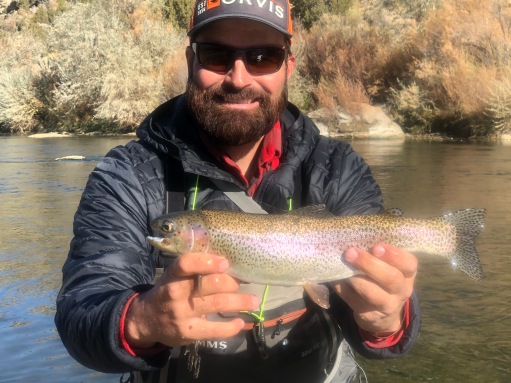 I think I had my most significant learning curve that day; I had fished this one long run from early on missing about six fish just getting off the hook with late strikes and whatnot. Pretty frustrating, then the run went dead. I fished up and down, no luck. Later Matt came down, and on his second cast caught a nice brown trout, I shouted up to him what was he using? He told me a small pink egg with an annelid fly underneath. He asked, what was I using? I said a large red egg with an annelid underneath. He came over and said I needed to change up, the larger red eggs work good in the morning, but when the sun gets higher, you need to change to a smaller pink egg for this run and time of day. We changed up my rig, and off he went.

My first six casts after that I had good strikes missing the fish, then bang nice rainbow on!! This was the same run that I had fished hard the previous hour or so with no luck. It just goes to show what experience brings to the table. So, my friends, when you can fish with experienced fly fishers, watch and learn, put all in the memory banks and down the road, it will bear fruit!!!!

Leaving the river on a high note, we loaded up and became road warriors again!! We talked about all kinds of topics, interests listen to some podcast, went over the trip, and before we knew it, we were home. For me, around ten-thirty pm, happy as a clam, although I think at this point, Matt’s eyes were popping out of his head!!!