Leaving the heat of the desert was a priority. I needed to get out of the city and out of the heat. I left arriving at the lake around ten-thirty in the morning, it was a beautiful day with temperatures hovering in the low Seventy Fahrenheit range.

I wanted to fish the Northern part of the lake near the dam on the Westside, on arrival there were four spin casters in the prime location with another four bait guys dotted around. I was left with fishing in the deeper water towards the West side of the dam which was fine except for casting, as there is a chain-link wire fence with barb- wire on top. That really leaves you to roll cast or cast sideways and try to angle out into deeper water. 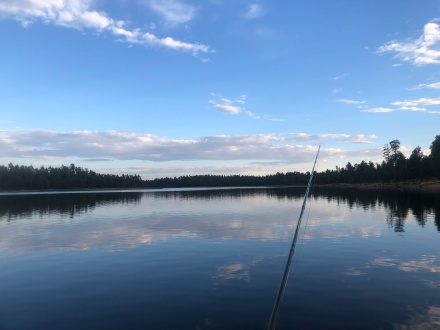 The sun was out, and it was a clear morning, I figured the fish would be down deeper, so I had on a nine-foot leader which I attached my black woolly bugger on the end. Next, I attached a pink nymph another six feet down. I used an indicator very close to the first fly and started to fish, having no luck I moved the depth around on my indicator so I could fish my flies at various depths throughout the day. I had used the black woolly bugger to start as I had had good luck in the past with that fly on that lake. I used leeches, streamers green weenies every color under the sun on the nymphs, nothing!!! Then I just stripped various fly all different depths to see if that would work, again nothing.

As the day wore on my optimism wore thinner, the spin guys were getting the occasional decent Bass and the bait guys were using power bait under a bobber, one guy was fishing three feet under his bobber in shallow water, he limited out in a couple of hours on Trout, the other bait guy was deeper he limited out on Trout plus a few bass.

In the meantime the clouds started to roll in, and we started to get the heavy odd rain shower, at this time I noticed out in deeper water the fish were beginning to hunt on the surface they were a long way out, but that gave me hope. I changed up to a big hopper with a nymph about four foot under. At last a few nibbles all from small Bass and Blue Gills, they were so little all they could do was nudge the hopper. For the hell of it, I put a small green hopper I had, and we were off to the race, I became the king of capturing three to six-inch Blue Gills and Bass.

Nothing last forever, a bunch of high school kids came along in their canoes landing just on the other side of me and proceeded to do cannonballs swim out into my casting zone and generally have a grand old time! Oh, to be young again! Then the mothers turned up with their folding chairs and set up camp next to me to keep an eye on these kids. Between the spinners and me was a space I could use to backcast, which now was occupied by this dad and young daughter that decided to bait fish there.

I was getting outnumbered and the day wore on, I moved to another shallow spot only to have a woman in a canoe paddle up to the beach next to me and put her dog off the canoe and then told him to swim out and follow her through my zone. Not to be outdone a guy in his tin boat who was trolling the lake decided I must have the prime real estate, so he decided to trawl fifteen feet offshore of me. Really Dude !!!

I sat down and ate my power bar contemplating my naval!!! Lakes at the end of summer who could blame them!!! I thought about leaving and getting my sinking line and rod out of there car, but there must be the odd big cruiser out there? Slowly everyone went, and I was alone again. It was now about five-thirty in the afternoon the wind had been blowing all day gently, but now it was glassing off. Well, time to put on the biggest hopper I have with a trailing scud this time. Starting to move along different parts and depth of the lake I noticed that if I used the hopper as a big Bass popper, slow strip fast strip, making it violent creating a ripple the Bass went craze for it.

Just about every cast fish were hitting it some so small, but they thought they were Muhammad Ali, bang, bang, bang left jab, there that taught you!!! They just chased my hopper down. It was nothing to have a bass then next cast a Blue Gill who by the way, feels so much bigger than their size. On one occasion the high light of my day was a six-inch bass took the hopper and a Blue Gill took the nymph double hook up, great sport!!!

The Bass were very aggressive they would take the hopper down I had to use my hemostat a few times to get the fly out safely.

So this day turned out to be a learning experience with no big fish landed, but I learned a new simple way to entice fish when all else fails, it also re-enforced me to be calm and live and let live we all have the same rights to be there. I stayed until dark as I felt for sure that monster was lurking just offshore and would come in to hunt. Funny just as it went dark it just went dead! I know the little guys were hunkering down as big daddy was now in town. Unfortunately for me I never did meet big daddy!!!