Yesterday all my troubles seemed so far away! It is after all called fishing, not catching!

Yesterday my friend Marc, a very experienced fly fisherman and me his humble companion, went off to the high mountains of Arizona. The bite was on!

All kind of posts were going up showing these magnificent Browns all gorging themselves on the cicadas hatch.

It is that time of year in Arizona, and we left a hundred degrees plus heat of Scottsdale to head into the cool mountains, anticipation was high!! We arrived ready with the latest flies on the creek after a two-plus hour drive. We decided to head down the creek to a new stretch we had not fished. We felt there would be much fish, not overfished as it is a trek to get where we wanted to go.

The weather was not helping it was hot and humid for the mountains, with thunder clouds overhead. After fishing for about four hours, we needed to get back to the truck to get some cold water out of our ice chest. Marc had hooked two browns only to lose them near the bank. I had struck out. Nothing!! There was no bug activity and very few fish rising. To offset that we had put on nymphs under our dry flies to hopefully attract that eighty percent of fish that feed under the water!  Didn’t you know!! 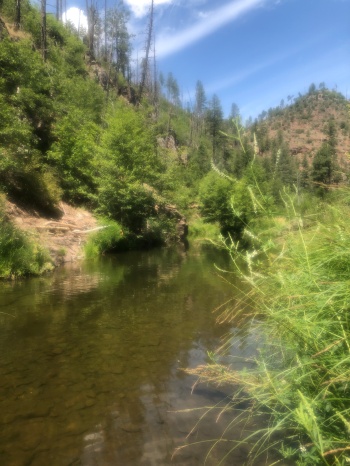 Just as well we hit the truck because as we did the lightning and thunder rolled in around us, with a nice refreshing downpour of rain for about an hour. Really cooled things off. I am sure that due to the weather change, the fish change their feeding habits as well, but sometimes they go crazy and feed, and other times they hunker down. This was one of their days to hunker down.

After the rain let up and the lightening past on by, off we went again. This time Marc hooked a few browns only for them to spit out his cicadas fly, me again nothing. So plan B jump in the truck and drive up to some new water that had not been fished that day. I took the first pool, and Marc walked on higher. My pool was pretty clear but long and deep with some good root cover on the banks. I decided to stay on this pool, fly-fishing it from end to end, then resting the pool and go back. It was late in the day, I was pretty beat but did catch one small rainbow, missed a brown on the dry and missed another rainbow on the nymph. Marc lost a few browns on the dry, and that was that.

On the way out we did see a friend of ours that had fished on his own all day on a different part of the creek. He was just dry fly only. He caught nine browns the biggest being fourteen inches and eight rainbows. So that is why it is called fishing and not catching!!! Our buddy had a successful day using dry only, and we struggled with dry and nymph rigs.

However good company, beautiful scenery who can complain. Tight lines, my friends!