Spent the day exploring, fly fishing up from Bear Flats. Started at Eight am finished at dark around Seven Thirty pm.

Caught many small rainbows with a few small browns thrown into the mix. The water was running pretty high with just a slight color but really pretty clear.

I fished using a black woolly bugger, with a black and silver size eighteen nymph under an indicator. I put a small split shot on the head of the woolly bugger to be able to get down deeper. The key for me was altering the depth as the pools we came across varied in depth. Some only three to four feet deep, others around eight feet deep.

It was key to get down to just above the bottom, the fish were deep. Dead drifting down with the current. Ken used a woolly bugger and small nymph but he stripped down current  high sticking, we both caught fish with these different methods.

It was along day the idea was to fish up to where Christopher creek converges with Tonto, we never made it! At three thirty we bumped into some other guys who had walked down from the Bears Trail head and told us it was another mile and a half to reach the confluence, plus the terrain was getting very difficult again. Not enough time, I will try again coming in from a different point onto Tonto I have in mind in the future.

Both Ken and I lost a big fish each with snapped lines, bummer!!! It was a great day with beautiful scenery, there are some big fish hiding away in the pools and deeper runs. I think next time in the deep pools, I am going to strip big streamers to see if I can get some of these big boys.

There is so much of this stream to explore, I have fished up from Kohls Ranch to Horton creek where it joins Tonto and down from Kohls Ranch for eight hours, fishing all the deep pools and runs. I have never reached Christopher Creek hitting Tonto. It is rugged country and not for the feint of heart. Then there is the stream as it continue down from Bear flats, where many miles later it is converged with Haigler creek then running into and thru Hells Gate wilderness. So much to Fly fish! If you go I would suggest taking someone with you, there is no cell services and a lot of cliff climbing up and down to get onto the creek in places. If you get hurt you are in big trouble!!!

If anyone is looking to explore call me I am always looking for fly fishing partners to go chase the wild ones!! 480 450 3102 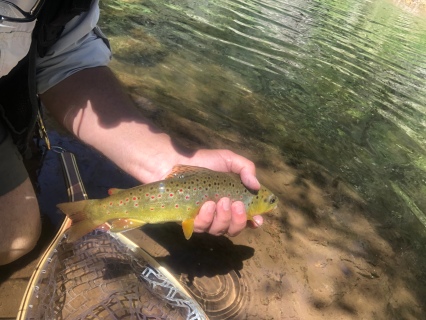