Do Individual Trout have color preferences on flies?

I ask this simple question as I was Fly Fishing Silver Creek AZ yesterday, catching one nice Rainbow trout that had three other flies in its mouth when I landed it.

I had been fishing the stream all day, the early part of the day fishing with a strike indicator, with a white leech and below that a green weenie. I caught three Apache trout in deeper water with that setup. 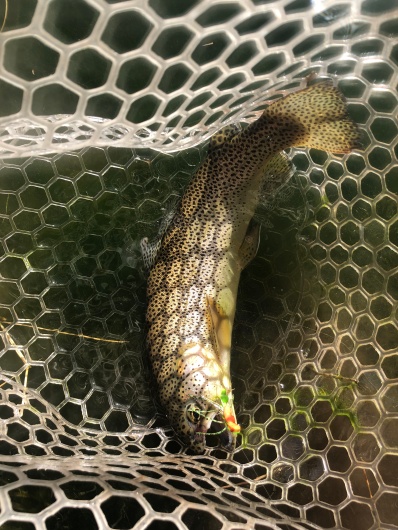 Later in the day moving up the stream into shallower water. I put on a grasshopper with a black and silver size sixteen nymph. The water was about twelve to twenty-four inches deep and pretty clear.  I had the nymph down about twenty inches off the hopper, immediately caught a nice Apache trout on my grasshopper on the surface. Shortly after another two small Apaches on the nymph. Fishing up and down the stream was somewhat erratic that day, most guys only getting the odd fish here and there. The weather was beautiful with clear skies and temperatures in the low Sixties. We could have done with a bit of cloud cover to help bring the fish out.

Moving further up the stream I came across a spot holding a lot of fish of all sizes just holding in the faster moving channel. A couple of other fishermen had been fishing them hard with little luck. I could not fish there as I would have been encroaching on their spots. So I moved on.

The water was getting even more shallow as I moved up and it was getting later in the day, so I decided to head back to my truck. On the way down, I kept thinking about those big trout just holding there with nothing working for those guys in that spot. 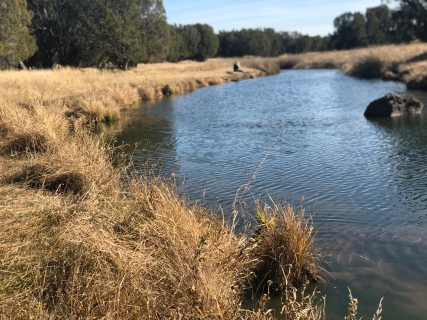 I decided to put on a red and black size sixteen nymph under my hopper and fish just higher up than them. I was more into the weeds on the side of the beginning of that run holding all those fish. I was very careful to keep plenty of distance between the other fishermen and me, so as not to disturb the water and show respect to them.

First cast I had a couple of trout nose up to the hopper then turn away. Second cast much the same, I decided to let the fly move further downstream and into toward the reeds. Suddenly my hopper was racing upstream, strike fish on! I had hooked into a nice size rainbow that was having none of this and taking off all over the place. This was one wise older fish, he immediately headed for a big rock in the far part of the run to go around the back side and break off my line. I managed to turn his head away from that and off he went again, this time to my side further down where there was a bunch of wild reeds growing, turned him again. Now running downstream. This went on for a good five minutes, Every time I brought him to the net, off, he went again. I had on six x tippet, so I had to be careful not to put too much pressure on, or for sure he would have snapped the line.

Eventually, I snagged him into the net, awesome fish!!!! Big teeth with a hook jaw. When I started to try and get my nymph out of his hook jaw, I notice a lot of lines hanging out of his mouth with flies all over the place. That brings me to my question? Are individual trout color prejudice? The first fly was a red egg, the second fly was a tiny size twenty-two Red and white midge, the third fly was a red worm, and yes you guessed, my nymph was a size sixteen red and black nymph. Red being the predominant color in all the flies in its mouth.

I know this fish new this stream well, as he immediately headed for the back side of this big rock further across the run to break my line. It was apparent to me that is what he has done numerous times, at least four times including me, hence the evidence of the flies still in his mouth. All red themed, so was this fish unusual or does this happen more than we know?

Of course, we all know that fish chase different hatches on their streams, with flies at that time mostly all the same colors, but do trout chase a particular color more than others, when no hatches are going on? To be honest, I have never thought about that, until now. Probably a moot point! However if you see fish and they are not chasing your flies, I for one am going to experiment with a bunch of different colors, to see if I find that one fish on the day that I can finally see his color and catch the bugger!!!!