End of summer another try at Canyon Creek AZ 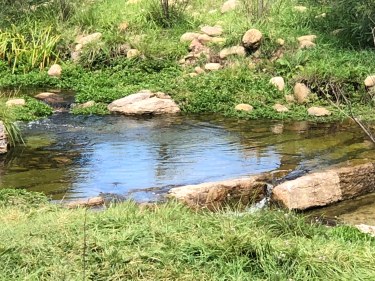 Well, I had decided after being skunked the last two tries to leave the canyon alone until we had a good flood. September fifteen, my resolve faltered, my wife was out of town with our daughter, so it was just me rattling around the old house. No Fun!

Of I went, arriving around nine in the morning, as I was putting my rod together, noticed another fly fisherman already in the hole I planned to attack, Bummer!!

Took me so long to get ready he was gone, in for a pound in for a penny as they say! Stealth mode was the key for the day, the water was super low with watercress really clogging the little water that was visible. Standing way back from the pool casting a bright six-legged grasshopper with a trailing nymph. 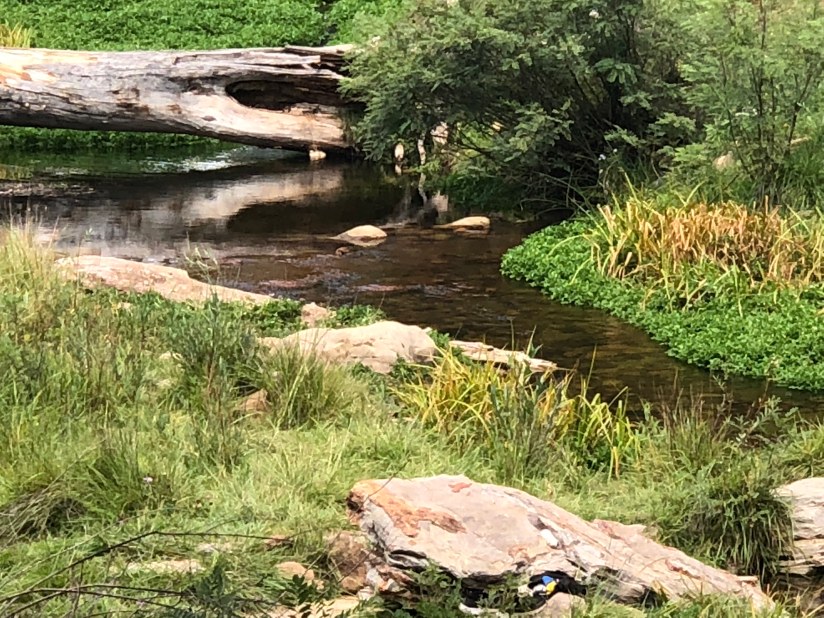 Fished the pool hard nothing, nada, zip, zilch! That combo always does well, I figured the other guy had also put too much pressure on that pool. Wading up to the next run, same set up. The water was so low the nymph was getting caught too much on the shallow bottom. The watercress was everywhere with little free-flowing water showing. Very precise casting to narrow runs, some not more than two feet across bordered by fly grabbing watercress. In the pools I could have cast some streamers, I just do not enjoy that as much. Maybe next time, I know friends that catch a lot of trout that way!!!!

Off with the nymph, it was all dry fly now. Grasshopper just did not work, tried various dries and sizes no luck. Then I remembered a buddy of mine who fishes here a lot had given me two cool looking ants he had made. He swears by these ants on this stream!

Further up, there is a long shallow run that you have to double over and crawl on your knees to get within long casting distance and not be seen by the fish! Crawling along, feeling my old knees creak and groan, I got within reasonable casting distance. Squatting down behind some tall reeds I took my time to watch the water. At the very head of the run under an overhanging branch was a nice trout feeding on the surface from time to time.

I was only going to have a few chances at this guy, and it was not going to be an easy cast, I had to unroll the fly just under the bush onto the higher water to drift down. One perfect cast later, luck of the devil!! Fish on took immediately running straight back down at me, rod high pulling in line as fast as I could. Thirty seconds later he shook the fly out on the top of the water, gone!! Sitting back on my hunches pondering my next move. He had disturbed the water for sure, but it was pretty long and wide. Might as well do a few more casts covering different parts.

As luck would have it, on one short cast in front of me, a beautiful brown could not resist. Skating all over the surface, dancing, rod again very high in short order brought him straight into my net!!! About 10” plus inches just starting to get fall colors not as bright as the summer fish.

Took the fly out of his mouth keeping him in the net in about six inches of water. Fumbling to get my phone out to take a picture, just as I was going to take, he just casually swam over to the edge of the net and jumped into the river and was gone!! Another fisherman’s story!! Right!!

That was the last fish encounter for the day. I decided to leave around two thirty in the afternoon, taking the dirt road towards Young about seventeen miles away. On the way came to a signpost for Haigler Creek which runs into Tonto Creek. Eight dirt miles later, came to the stream only to find people swimming in the nearby holes. This creek runs through some beautiful rugged country in a canyon. Very tough stream to fish, as it goes into canyon walls that you have to wade to move on. I will fish there but only with other guys. This is a wilderness and not for the faint of heart. Bear country as the signs warns and a lot of steep banks that have to be scrambled up and down.

It is very surprising to me how many great streams we have in the high country in Arizona. Including the Mogollon Rim, White Mountains, the Apache reservation and so much more. This does not include all the different lakes we have access to! The elevation ranges from four thousand feet up as high as Eleven thousand five hundred feet on Mount Baldy.  The cliffs you come across are made up of Limestone and Sandstone with vast Ponderosa Pine Forests. Often time these streams are nestled into canyon walls and then more open spaces. If you need a Fly Fishing guide Cinda Howard of Fly Fish Arizona and beyond is excellent. I have used her services many times.

I would guess that most of the population of Phoenix has truly never gone that far off the beaten track to experience these wildernesses.  I am also surprised that some fishermen want to keep this all a secret, their honey holes, etc.! Just a few for sure, but I have been told I should not write about my experiences. This is God’s country, we all should enjoy and experience the wildness of it!

I have lived and traveled all over the world, been very lucky, the beauty of the high country has its own splendor that can match anything. Get out there, it is under your nose and not that difficult to get to. The summer months are best, most places you can use a car, make sure there is no rain in the forecast!! However, once the weather changes you will need four-wheel drive and a lot of common sense as some of the dirt roads get very bad, with a few having very steep if not vertical drops that are only a few feet from your tires.

The fishing can be un-real and it also can be slow, like anywhere. A lot of the streams are stocked at certain times of the year with rainbows.

The big trophies for me are the wild brown trout, the native Apache trout along with brook trout and the Gila trout.

Some of the streams are for Fly fishing with barbless hooks and are catch and release. However, most are for bait fishing. Check out before you set off. Don’t forget the Salt River nearer to Phoenix, this is also stocked at certain times with Rainbows, along with native Bass, Catfish, Bluegill, carp and Sonora suckers excellent fighting fish!

Also, go to Oak Creek Canyon nearer Sedona, it is beautiful and has a great Brown Trout population as well as stocked rainbows. There is a guide service up there, Sedona Fly Fishing Adventures that you can use that is very knowledgeable. I have not used them, but I know one of the part-time guides, and they know their stuff!

A little nearer to Phoenix is the Verde River, great place to fish, fish just above Cottonwood. Again there are small lakes which are stocked as well as the stream. In the stream just next to the lakes I have caught plenty of Rainbows, there is also Bass, Catfish, and Carp. So you see we have plenty of selection and it is nice to get out of the heat in summer!

Till the next time, tight lines!!!