A day and a half Fly Fishing with a good friend, up in the White Mountains of Arizona X Diamond Ranch.

Bruce, a Friend of mine, called suggesting we go back up to X Diamond Ranch for a couple of days fly fishing, we booked a log cabin and off we went. It is precisely 4 hours’ drive, not too bad when you are talking about all the fish you are going to catch, the new flies we want to try, the optimism of fishers the world over.

Leaving Metropolitan Phoenix, with its five million population, the concrete jungle, with temperatures hovering in the hundred and eight-degree Fahrenheit, sweltering temperatures. “but it is a dry heat” Heading North East up into the high country, where elevation range from five thousand feet to thirteen thousand feet at the top of the Apache Indian Reservation ski slopes. 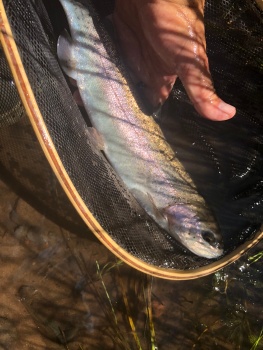 X Diamond range nestles in a valley at seven thousand feet where today’s temperatures will be in the mid to high eighties during the day, dropping down to cooler temperatures at night. The water running out of the taps, so cool and fresh tasting, the wind rustling the nearby trees. Silence, the odd dog barking in the distance as if to say,” hey I am here this is my land.” The calmness of the land with our wood cabins with big verandas, ideally located to take in the scenery. My mind goes back in time to when the settlers first came here, seeing this valley and putting down stakes to build their future. Today the drive over, vast plains of high yellow dry grass swaying in the gentle breeze, the vista with mountains randomly poking up here and there, breathtaking in its simplicity and vastness. The soul quits down to the pace of the land. This view unchanged from then to now. Perfect to find a stream to cast a fly!

Offloading all our gear, food, wine and Bourbon for medicinal purposes, rickety knees, suspect back. You all know the drill! As usual on these trips someone always forgets an essential piece of vital equipment, in this case, my buddy’s cheater glasses, which without, there is no chance in hell of tying on a small nymph! No problem, I have a spare pair in my tackle bag. I dig deep, only to find they have snapped in half!! Ok, plan B we have one pair between us, not a problem, call when you need them.

The weather is bright in the 80’s; the water is very low running with some color. Not the best conditions. The stream is fed from reservoirs higher up, we have had little rain this year. When that happens, the levels drop, and the amount of water that runs down get less and the levels go down. Hopefully, we will get some rain soon from the monsoon season, and the flow will pick up again.

We fished for about 2 hours, Bruce caught three nice sized rainbows, I missed a few surface strikes, but that was all she wrote. Casting a dry with a dropper nymph had a few fish come up and look at then turning away without a strike. The fish seem to be holding in the faster moving shallow water. You would think with the sun directly overhead they would be in deeper water. Usually, that is the case especially with the water being so shallow. Maybe with the warmer water, they need faster moving oxygenated water. I am no expert, but the fish also seemed disinterested with the nymphs deeper down. We decided to retire for a drink and then head back out about 2 hours before dark. My friend is new to the art of Fly fishing, so he was getting more than his fair share of tangles, which as we all know is very frustrating.

Over a few glasses, we came up with the great idea of setting two rods up for him, to cut the time down on sorting out tangles. Later that evening off we went, I did well catching more than my fair share of Rainbows on dry and nymph.  This time of day with the sun setting and the stream being in a valley casting a shadow over the land, the fish were much more active. Taking the dry flies as much as the nymphs. There was no hatch to speak of, so I think the silhouette of long legs off the grasshopper was just too tempting!

My friend not so well, we had gotten separated on the stream, and later he told me he did not want to bother me to sort out his tangles. That is the trouble with friendship; sometimes we are too concerned. I would have much preferred him calling me, so I could put on some new flies for him to hopefully catch his share.

After dinner and a few medicinal Bourbons, we went to bed. The next morning, we both woke up early, neither one of us having slept well. Out the door on the stream, I headed downstream and told him to call me if needed. On my walk disturbing a small deer and his big brother, all up close and personal. I had decided to fish some lower pools where the brown trout hang out. That was a mistake, to take on the more difficult ripples and pools when first starting out.

I am the type of fisherman that must feel it; I have to be connected to what is going on around me. It was funny because as I was taking the long walk down to the bottom of the stream, I felt out of sorts. I was breathing hard, I think due to the altitude, not the 30 pounds I am carrying around that I need to lose!!

I was in a hurry, also because I felt I did not want to be gone too long from my friend due to his issues with tangles, so that sped me up a bit. The stream was much shallower than the last time I was there, a couple of weeks ago.  I did not take my time to review the stream, the difference in the water flow, the shallower runs, etc. I lost a lot of nymphs that morning as my mind was not thinking clearly. The pools, ripples were very varied in depth, so I had to keep adjusting the length of the dropper, getting it wrong more than right. I did catch 2 Rainbows but no browns. In retrospect that was a good lesson learned. In the future stop, look, take in the terrain and then plan on the way to fish that particular piece of water.

Moving up the stream later I did finally dial it in and caught a respectable number of beautiful rainbows and one tiny 5” brown. Finally, finding my friend who had by now found his wives old reading glasses in the car, which with some squinting he was able to tie on some flies.

It is difficult when you are catching fish, and your friend is not, it is a fine line on trying to help, without sounding like a know it all. Around 11 in the morning we went in for an early lunch, time to relax and talk about the morning. The fish seem to be taking a mix of our dry flies, in this case, a colorful grasshopper with assorted color nymphs. I used black & silver, gold color, plain red, bronze even a few green ones, they all worked equally effectively!

Our plan was to get on the road by two that afternoon, that left a few hours to catch the big one! The clouds came in giving us some overcast conditions which picked up the fishing. Bruce had trout come up to his fly only to turn away at the last moment, so he had fun trying to entice these finicky fish. Later in the day, he did catch another rainbow.

Time to head home with thoughts about the big one that did not get away as we did not catch him! Till the next time.