Up early on the Salt River around 5-15 am, headed for Bluepoint only to find it full of bait fishers all wet wading. Its Friday morning does anybody work anymore! The water is running so high, around 1100 cubic feet per second. Flowing at this level, it covers most of the good pools and riffles. Ideally, about 500 cubic feet per second there would be a lot more holding water. 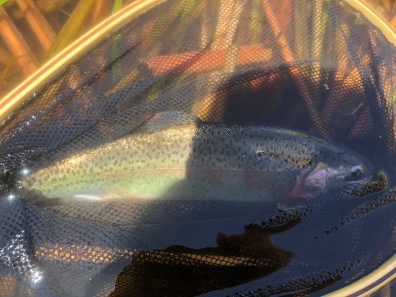 I headed downriver from the bridge, passed Sheep Landings car park, closed to vehicles. There is a deep side pool off the main river with a little beach you can wade.

Set up a strike indicator with a size 12 cross between a grasshopper with large beetle legs followed three feet down with a beaded Cooper John size 12. The side pool has a lot of various currents, so I cast into the different currents, some shallow water some into deeper water. The pool nearer the main flow is very deep, causing me to put the flies down deeper, then shortening the depth of the flies as I fished more along the side nearer the weed banks under water. Tally one small Bass on the Cooper John.

I did see some big carp cruising around, so I switched up to an egg for the bottom fly, to see if I could entice one of these monsters, no luck! About an hour in, I notice some Sonoran Suckers, with occasional carp feeding on the surface on very small like flies, tiny they looked like gnats.  I changed up to a dry fly combo. As the lead I used an Elk wing Caddis size 14, so I could see, followed by a Blue Wing Olive Parachute size 20 about 20” behind. That was the smallest fly I had in my box and the lightest in color. I cast all over the place as the fish were very random, no pattern to their feeding. It was great to practice some long casts, again no luck!

Around 10 am the river filled up with humanity using Kayaks, Paddleboards, Rubber tubes with boom boxes attached, and you name it. The shame is in just a few, who throw their discarded Coke cans, Beer cans into the river which floated down along with them. Such a beautiful place, why spoil it? Pack it in and pack it out, how hard is that!!

Time to head up higher in the river system, above all the car parks, where everyone enters the river. I have one pool that is a little hard to get to. You must work through the bush, weeds, bamboo along the bank to get in. Then wade up against some strong currents to get to the edge of the pool off the main river. The going is slippery and very rough uneven footing the water flowing past rapidly.

With this amount of water, the side pool is starting to get covered, but there was just enough left to fish, if the water gets any higher it to will be gone for a while. Using the same rig with the strike indicator, I worked the pool up, eventually landing a decent Rainbow Trout on the Cooper John.

Just for the hell of it, I worked the pool back down stripping the Cooper John, upstream, downstream, across the stream, every which way to no avail. After a good 8 hours on the river with the temperature now hovering around 98 degrees, it was time to head home for a cold brew!

I know there are quite a few Fly Fishermen who fish this river, so if you have any comments or ideas of different rigs that work, I would like to hear from you with any feedback.